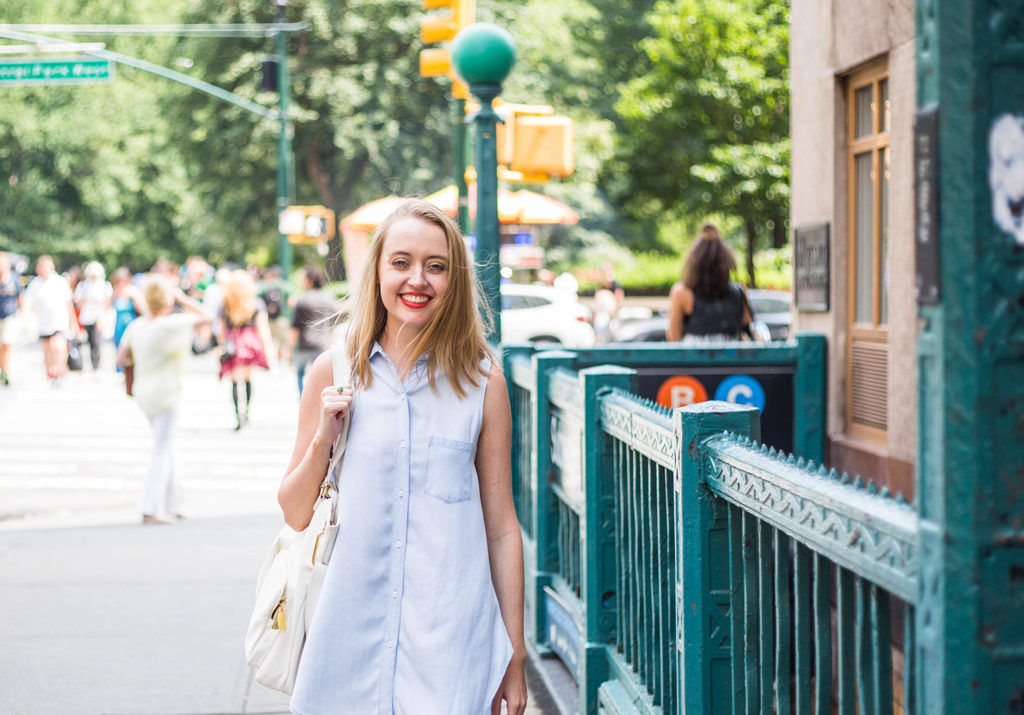 Meet Holly Mitchell—one of our amazing French students with a shining, stage-worthy smile. And that comes as no surprise, as she was an NYU Tisch star and was on the path to become an actress. Check out her story that brought her from rural central Florida to the fast pace of NYC life—and how Fluent City has played a key role along the way.

Fluent City(FC): Can you tell us a little about your life before New York?

**Holly Mitchell(HM): **I grew up in rural central Florida, I had dreams of becoming an actress, so I moved to New York to pursue that. I went to NYU for theatre. Actually the first time I came to New York I was 15 years old, and I lived in Brooklyn by myself and commuted every day to take class at the American Academy of the Dramatic Arts. That was my introduction to the New York experience and I just fell in love and knew that this was my home and that I would have to come back. So, I’ve been here 11 years now and it’s been amazing! I’m no longer in theatre. Now, I’m in the field of dentistry (I manage a dental practice on the Upper West Side), and I do a lot of consulting around the country, so I get to travel.

FC: That’s awesome! How long were you in New York for when you were 15?

**HM: I was here for two months. My mother let me audition for the program and I think that she didn’t think I could get in—and I did! And she said, “Holly, you know, I don’t have enough money to send you, it’s $5,000.” And then she went on a trip with her sister to Vegas, and she put $20 in the slot machine and $5,000 came out. She called me from Las Vegas and said, “I guess you’re going to New York.” So it was meant to be.
**
FC: What do you love most about New York?

**HM: **What I love about New York is not just the diversity and complexity of experience, and the overstimulation of every sense imaginable—but also that the people are so amazingly creative and vibrant and that there’s depth. But the interesting thing about that kind of depth is that as New Yorkers, we don’t go there. We tend to stay surface, right? We walk with our eyes down, when we have conversations with people it’s very surface like “what do you do for a living?” In France no one would ask you what you do for a living.

But, if we actually took the time to ask deeper questions of each other, like “What are you most proud of in your life?” or “Why did you choose your career?” we would discover so much more and connect on so much of a deeper level. There’s a possibility of that with the type of people who are attracted to this place. There’s so much depth of feeling and desire. But we don’t go there. 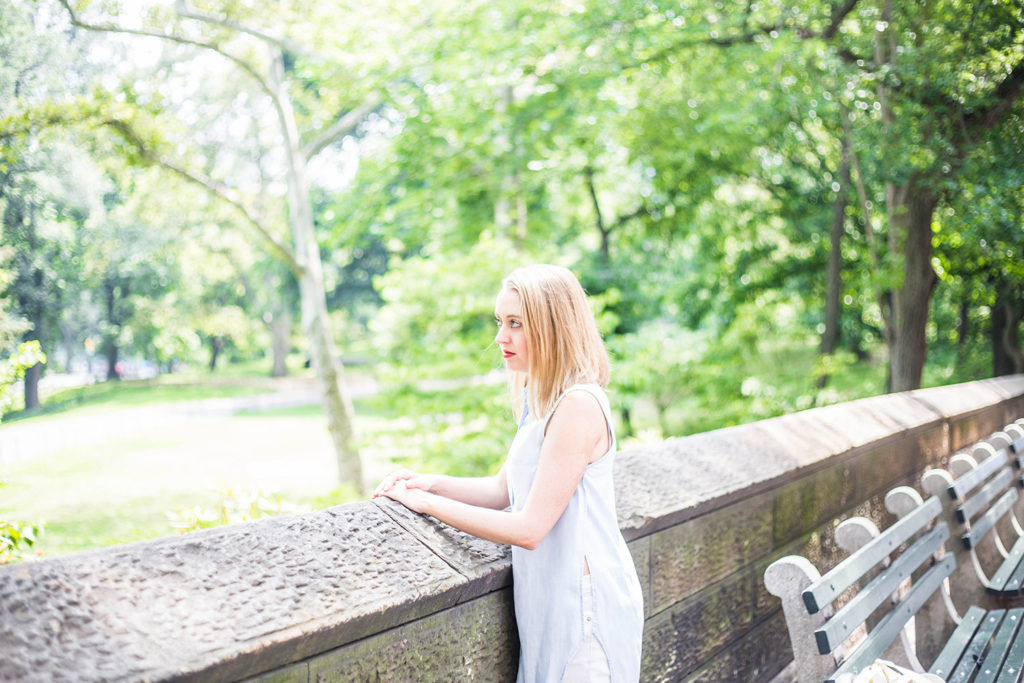 FC: That’s so great—how did you get involved with Fluent City?

**HM: **So, I was always jealous growing up of people who could speak other languages. And I was walking down the street two years ago and saw a sign that said “Learn Italian.” So I said, “Ok! I’ll learn Italian!” So I did! I started Italian and I realized very quickly that learning a language was something that came very naturally to me.  I became fluent in Italian in about a year and then thought, what’s next? Maybe French? And I just stumbled across French at Fluent City and started group classes with [Fluent City’s French teacher] Thibault, and private lessons on the weekend. I did two classes a week and got pretty conversational within six months and got to the level of fluency within nine months. I did a lot of studying on my own, but it’s easy work when you love it. I really discovered a passion for language, and I think it’ll be a lifelong pursuit. How many languages can I learn before I die? I’m thinking 2017, it’s time for español! And, of course, I would go Fluent City all the way.

**FC: Why do you think Fluent City is an especially great way to learn a language? **

**HM: **Well, I love the company itself. I love the brand, the people. They’re so kind and engaging, a really interesting vibe. I love now that it’s evolving into this lifestyle brand, which is really awesome. Connecting this communities of people who have similar interests; I just really love it. Thibault has been the most amazing teacher, he’s supported me all the way, and he’s become a really dear friend of mine. We talk about life and he knows all my secrets.

**FC: We love that! How do you try and incorporate French into everyday life? **

**HM: **I think that’s really the key of getting fluent fast—getting that language into your life every single day. Because if you can get it into your life every single day, it becomes part of your thoughts. So, for me, trying to make it fun and changing it up all the time makes that easier. For example, I’ll listen to podcasts, Coffee Break French, I listen to news in slow French. And then I watch Orange is the New Black with French subtitles, and I’m currently reading Fifty Shades of Grey in French: “Cinquante Nuances de Grey.” I don’t normally read fiction like that because of my work schedule but if I can make it academic, then I’m killing two birds with one stone!

For vocabulary, I follow lots of things on Instagram and add any words I don’t know to Chegg (a flashcard app). Social media is good for random little sayings, stuff like that. French is quite sensual, it’s such a beautiful language, and so I love listening to it and speaking it whenever I can.

FC: Do you have a favorite French restaurant in New York?

**HM: **Well, I just became vegan, so it makes it more difficult to truly enjoy French food. But, I took an Italian cooking class at Brooklyn French Kitchen through Fluent City. It was so fun! We did Italian street food, so we made these arancini, which are deep fried cheese and rice balls, we made a beautiful salad, and we made farinatas, which are fried chickpea pancakes.

FC: Have you had any cool or unique experiences where you’ve been able to apply the languages you’ve learned?

**HM: **I had an Italian patient recently that I was able to help at my dental office! Also, I go to French Speakeasy events held by French Mornings (but I hear about through Fluent City), and they’ve been amazing. Going and getting to speak French with real native speakers, and making friends with people you might have never had to opportunity to interact with, is so cool.

It’s also amazing in the small and unexpected moments—like sitting in a cab and realizing your cab driver speaks French so you just start talking! And it feels so good! It’s like this whole other level of connection that you never would have been able to experience. Language can do that. 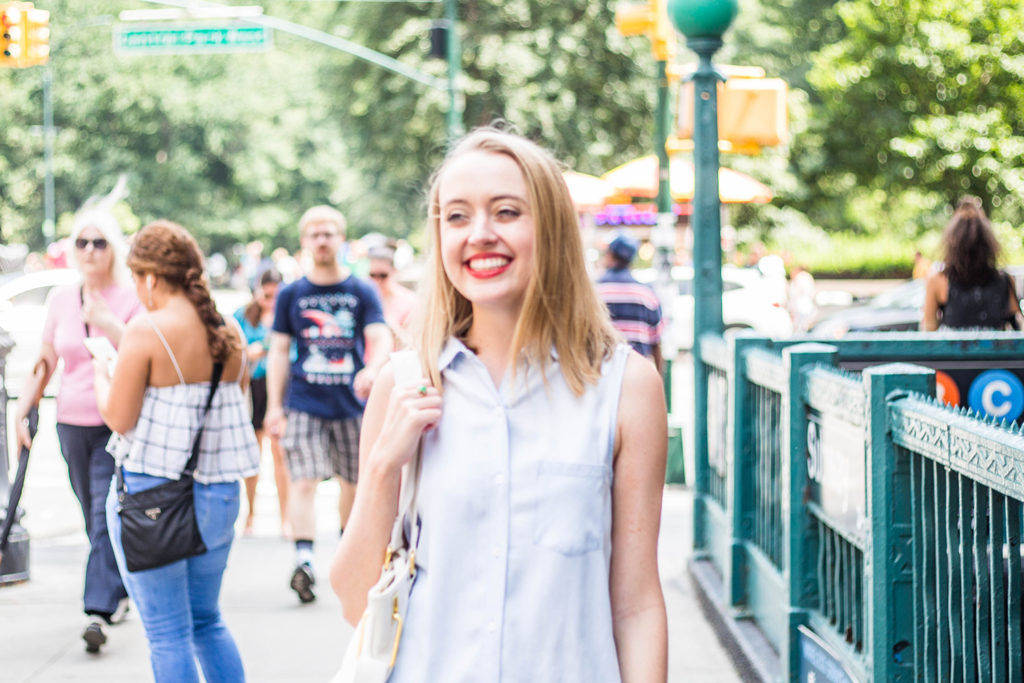 FC: What is your favorite word in French or Italian?

**HM: **Well, I write French poetry, so that’s part of my studying ritual. Sometimes I write it freeflow in French, or in English and then translate into French. I try to do this weekly. And there was this phrase I came across while writing, “faire un calin,” which means to hug someone. But the idea of hugging doesn’t exist in France like it does in America, and that phrase kept going around and around in my head. So I wrote a poem about this exchange of hugging that is so different in each culture. Hugging is so much more intimate in France, and kissing is so much more casual.

**HM: **I think something really intimidating was the subjunctive. But then when I realized how much more impactful what you want to say gets across, I fell in love with it. Because it’s a feeling, and a feeling of possibility. And we don’t really have that in English. When you’re saying something and it has this aura of possibility, it becomes infinitely more beautiful what you’re trying to portray and infinitely more understood. I was incredibly intimidated by it when first introduced, and now it’s one of my favorite parts of the language. I find the concept really compelling.

FC: Do you have any advice for beginning French speakers?

**HM: **If you really want to use it, fall in love with it. However you need to—whether to fall in love with the culture, the food, the wine, even the men! Chase what you like and what you’re attracted to, and find French in that space.

Ready to fall in love with French now? We thought so. Check out our list of available classes here. Have any questions? Let’s chat about it! Email us here.

What Learning New Languages Can Teach You About English

6 Benefits of Learning Another Language