Spanish Slang Around the World #1

Spoken by 400 million people across 20+ countries, Spanish is the second most widely spoken language in the world. Did you know that there are 41 million Spanish speakers in the United States alone? That’s more Spanish speakers than in the entire country of Spain!

With that much diversity across countries and contents, there’s bound to be some variations on the language—especially for commonly used slang words. Here, we take a look at the words “dude” or and “beer” and explore where exactly each word comes from and why it’s used in certain countries.

How to Say “Dude” in Spanish 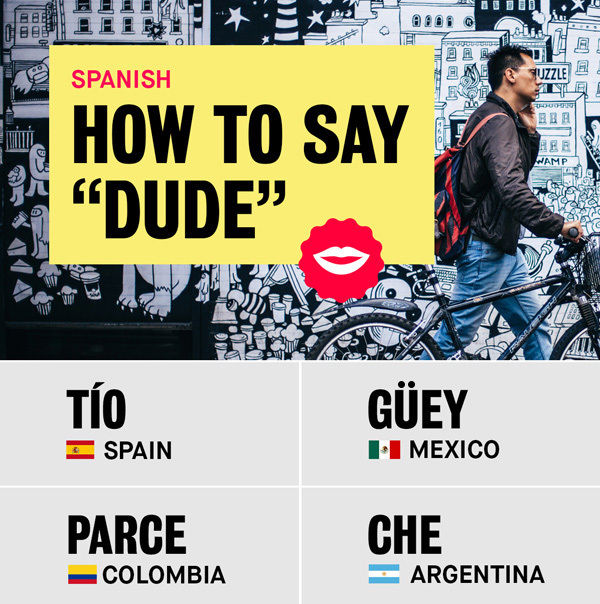 Ah, the enigma of the word “dude.” In English, we have words like “homie,” “bro,” and “man” are a few that can replace the word dude. It’s the same in Spanish slang. There are a ton of variations.

In Spain, the word for uncle, tío, also doubles as a word for “dude.” You can also use “tía.” So when you’re out with your friends in Spain and you’re making eye contact with the cutie across the room, you can turn to your friend and say, Ese tío es guay? which means “Is that guy cool?” Guay is also a commonly used word for “cool” in Spain, which we’ll talk about a little later in this post.

While you can greet a stranger or an acquaintance with “hola amigo” or “hi friend” in Colombia, parce is the much more commonly used expression. It’s a shorter version of the word parcero (for a man) or parcera (for a woman), which came from the word aparcero, which is the term for the person who held a stake in a community plot of land. Thus, your aparcero would be someone you relied on—and would hopefully, also, be your close friend.

Use this colloquial term in place of where you would normally say “dude.” Although originally only for males, you can use it for both males and females. However, sometimes “chava” is used, which is a slang word for “girl” or “chick.”

Alright, so the word “che” can actually mean multiple things. It can be an interjection that means “right” or “so.” It can also mean “hey” or “buddy” or “hey, buddy.” It’s a very commonly used word. And, if you’re wondering if there’s a connection to Che Guevara (the iconic revolutionary figure of the Cuban revolution), there is. Che Guevara’s real name was Ernesto, but he was nicknamed “Che” by his Cuban comrades because he used that word so much (since he was originally from Argentina).

How to Say “Beer” in Spanish 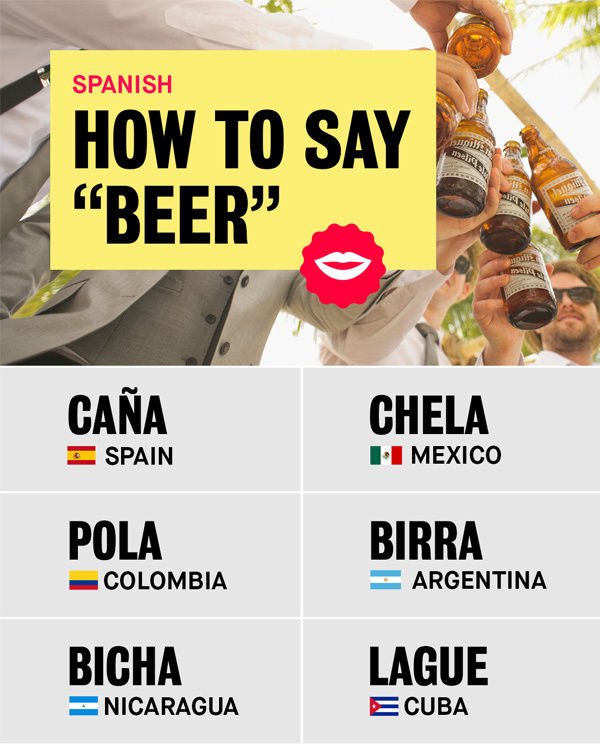 You know when you’re at your local bar and you’re a bit overwhelmed by the 15 different beer options? Yep. There’s about that many different words for beer in the Spanish language (and quite possibly many more). You get started, and you open up a whole can of cervezas.

When you order beer at a bar in Spain, you have to order pretty specifically. And so, the word “caña” doesn’t just mean beer—it means a very specific serving size of beer. It’s the smallest draft size of beer that a bar sells. It’s a pretty common thing to say, “Vamos a tomar unas cañas,” which translates to “let’s have some beers.” But if you’re feeling like having a larger glass size, you can also order a pinta, which is a pint, or jarra, which is a mug.

While beer comes second to the (in)famous Colombian drink aguardiente aka “firewater,” which is undoubtably the country’s national drink, Colombians still enjoy a good *cervecita *pretty often. To order one, you can ask for a pola, chela, or birra. Some locally brewed beers are Águila and Club Colombia. Feeling fancy? Order an artisanal craft beer by Bogota Brewing Company.

Be careful with this one, as saying “bicha” in another Spanish-speaking country like Puerto Rico could get you into trouble. There’s a reason that it sounds a bit like the English word for female dog…but in Nicaragua, this is a slang word for beer.

The literal meaning for chela is “blonde.” If you want to get a party started, you can yell something like, “Saca las chelas!” or “Bring out the beers!” There are a ton of beers brewed in Mexico that we can find here in the states. But, if you’re asking us, skip the usual Corona and go with Modelo or Bohemia.

“Birra” is actually the Italian word for beer. It addition to Argentina, it’s used in a lot of other Spanish-speaking countries as a slang word for beer.

Though you can now find all types of imported liquor, rum and beer are really what fuel the Cuban drinking scene. Order a Cristal or Bucanero to blend in with the locals.
Want to learn more? Maybe it’s time to sign up for a Spanish class, just click here to get started.