Are These Myths Stopping You From Learning French?

Do you find yourself thinking “I would love to learn French, but I'm sure I’d be terrible at it?” Do you wonder why learning French seems so intimidating? Well - You're not alone!

Here are a few persistent myths about French you should stop believing:

Myth 1: French grammar is too hard
Does French organize nouns, verbs, adjectives in some obscure, indecipherable way? Sentence structure in French is far from being radically different from what you know.

The scary reputation of French grammar mostly comes from a feature that doesn’t exist in English: conjugation. In French, the ending of verbs changes according to each pronoun and tense you use.

Although you might be unfamiliar with such variations, all you need to do with French conjugations is memorize them–granted, that takes time, but it’s nothing you can’t do! Besides, you can use your French before you know all your verbs: conjugation mistakes won’t stop native speakers from understanding you. 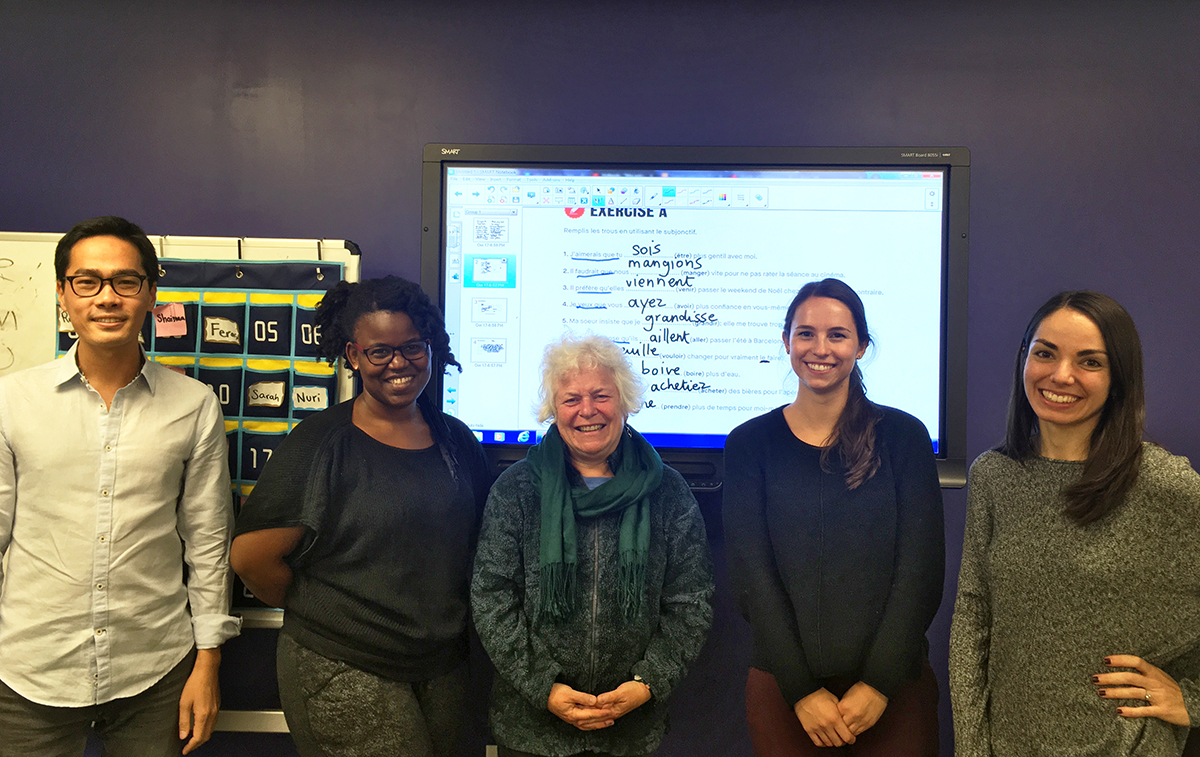 Claire and a few of her French 4 students.

Myth 2: French pronunciation is tricky and unpredictable
Although French has its own unique sounds, making them yours only takes a little time and practice. What people often perceive as confusing is the relationship between its spelling and pronunciation.

Chances are you already met a few French words in written form before finding out how they are pronounced! For that reason, you might believe that French pronunciation is arbitrary and unpredictable, but it isn’t!

Although each French sound has a few different spellings, a specific combination of letters will consistently result in the same given sound–unlike in English. That means that once you learned to match French sounds with their possible spellings, the code is cracked, and you can guess how new words are pronounced.

Myth 3: Spoken French is impossible to understand
In every language, native speakers speak fast and tend to mash certain syllables together in sentences. It is true of French also, and that's why it can be challenging to understand authentic spoken French. However, the more French you learn, the more elements you will be able to identify in conversation.

Comprehension is not about understanding every single word or sentence that is said, and most learners underestimate how much meaning they can gather from the few things their ear picks up on at first. Understanding spoken French–or any other foreign language–is initially a guessing game! The more context or clues available to you, the more you will be able to anticipate, and recognize what you hear.

Our brains are amazing at reconstructing partial information: when you watch a French movie with English subtitles, you’ll naturally connect those translations to the sounds you hear and end up understanding way more than you think!

Do you want to give French a try? As a teacher and a native speaker, I firmly believe that anyone is capable of learning French and doing great at it. All you need is curiosity, and the willingness to dedicate some time to the language–if you have those, take the plunge!